Using Aria To Sell Your House In Templepatrick! 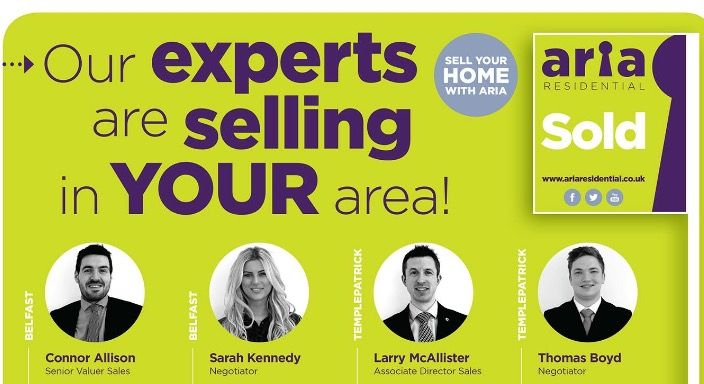 Using Aria To Sell Your House In Templepatrick

For anyone to have opened a new estate agency at this time amounts to a very bold statement of faith in the Northern Ireland housing market.

To have done so in a small County Antrim village lying 9.2 miles from Belfast is an even more impressive vote of confidence in that village’s people and potential.  The village is Templepatrick, the estate agency is Aria Residential and together they look like being very good for one another.

Yes, house prices in Northern Ireland nosedived more than in any other part of the UK post-2008. And yes, there is post-Brexit uncertainty right now.

But no, the world has not stopped spinning; people continue to need somewhere to live. That means they are still buying houses and will go on doing so. Whatever else changes, the need for a roof over our heads does not. And with eight years’ experience, and success, in Belfast through the depths of the 2008 crash, the recession which followed and the impact on property prices, Aria have an built up impressive track record when it comes to selling houses, whatever the economic climate.

Attention to detail, a willingness to go the extra mile and up-to-date marketing which maximises the possibilities offered by social media are three good reasons as to Aria’s fast-growing reputation for getting the job done.

And there’s a fourth: Aria do not charge up-front fees. In other words, if they do not sell your house, they don’t get paid. No lack of motivation there, then. They are a young, hungry company staffed by personnel who are knowledgeable about what sells and how and why it does. In addition, they are committed to excellence of service in the belief that, ultimately, this translates as success in the form of a house sale at the right price.

Experience has taught them that Templepatrick ticks a lot of  boxes for the discerning house-buyer. For a start, although it is out of town it is close to Belfast. The capital city is a mere 15-minute car journey away. And if you don’t want to drive to work there is a new park ‘n ride system. Less than 10 minutes will take you to Belfast international Airport .George Best Airport is just 18 miles away.  The towns of Antrim and Ballyclare also within easy striking distance. And there is no shortage of very good easily-reached schools.

Those are all pluses in attracting potential buyers to consider setting up home in Templepatrick.  The fact that local facilities include a superb golf course at the village’s Hilton Hotel is another draw. The Dunadry Hotel and Country Club, like the Hilton, a four-star venue, is nearby, too, of course, while the three-star Templeton Hotel in Templepatrick’s Antrim Street also enjoys quite a reputation for quality.

All such features serve to enhance the prospects of selling a property in Templepatrick and with Aria now ensconced at the Twelfth Milestone Shops, that bodes very well for would-be vendors in this part of County Antrim. It also says much for his faith in the village and what it has to offer that Aria’s Associate Director Larry McAllister has set up home in Templepatrick. Now that’s a genuine example of putting your money where your mouth is! Aria’s promise is that they will invest their time, their money and their  knowledge in order to maximise the customer’s prospects of a sale.

It’s not a case of asking a house-seller a fee and then just sitting back in the  hope that a buyer will appear, as if by magic. Houses do not just sell themselves; sales come about as a result of an estate agent working to make it happen.

So if you are hoping to sell – or buy – a property in Templepatrick, contact Aria and give them an opportunity to prove that they are as good as their word.